This Used To Be The Fastest Car In The World, But Is It Worth Saving Now?

Some of the best gifts in life don’t look like gifts at first. You may have some that keep you up at night, some that eviscerate your bank account, and others that may give you tetanus. This cheap Jaguar XK120 is a fair helping of all three, but if you could manage to get it done, all the coffee in the world wouldn’t be able to bring you off the resulting high. Here’s why.

This 1954 Jaguar XK120 was notable for several reasons when new. First, it was the world’s fastest car when it was launched, with a top speed of 120 mph.

Second, it’s one of the most elegant cars ever made, preceding the ubiquitous and monumentally pretty E-Type, while matching the E’s trademark inline six cylinder wail. However, this particular car is missing that particular aspect of Jag-ness because instead of the dual overhead cam inline six that made Jag famous, this XK has a Ford V8 shoehorned into its narrow engine bay.

It’s also a complete and total project car and needs everything either redone, rebuilt, or restored, although the body doesn’t look like a complete rust pile, despite currently residing in Connecticut. While total restoration may be a daunting task for the regular mechanic with a meager salary, here’s why it might not be such a bad project to take on. 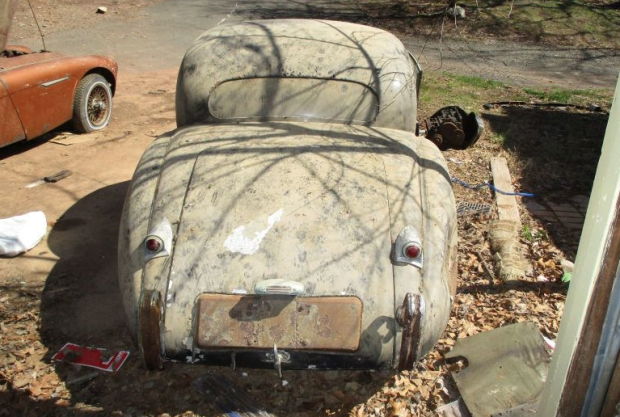 Jaguar prices, especially the extremely early iconic models, are going absolutely stratospheric.  Average value, according to Hagerty, for a 1954 Fixed Head Coupe, or FHC as it’s known in Jag circles is more than $77,000.

Obviously, the potential sale price of this car would be hindered by the lack of an original engine, but at a price this affordable for a classic (current bidding is just over $13,000) I’d urge the potential buyer to consider another avenue – don’t sell it and use it for a restomod.

Jaguars, over the years, have retained their heritage with very little in the way of compromise to their styling. (Yes, I’m counting the X-Type as well in that statement.) What I’d do is put a more modern XK8 drivetrain in the car, which is readily available for pennies on the dollar of its original cost, install some modern brakes, overhaul the suspension, and have a modern version of what was once the world’s fastest car.

Here’s an even crazier idea: you could restore just the underpinnings and interior and leave the body in its worn and tatty shape and instantly make Jonathan Ward the most jealous person on the planet.

However, those who don’t really have a knack for engineering and throwing aside the status quo will be glad to hear that you could realistically track down a replacement, period-correct engine, but as the cars were built in relatively small numbers, I’d wager that you’d have to do a lot of across-the-pond shipping for parts that honestly weren’t that great to begin with.

How long would an undertaking like this potentially take? For the average mechanic that’s learning on the go with some garage space and extra cash, it would easily be a multi-year project that would test patience, wrenching skill, and your relationships with any sort of supportive significant other.

It wouldn’t be easy, but in my opinion, it would be beyond worth it in the end.

What is the difference between HID and LED light?

High intensity Discharge (HID) lighting replaces the filament of a light bulb with a capsule of gas. The light emanates from an arc discharge between two closely soared electrodes. This discharge is hermetically sealed inside a small quartz glass tubular capsule. HID lights require a ballast, which carefully regulates the voltage supplied to the capsule of gas. The amount of light produced is greater than a standard halogen bulb while consuming less power; this light more closely approximates the color temperature of natural daylight.

In all High Intensity Discharge lamps, light is produced by passing a current through a metal vapor. Free electrons with an atom in the vapor momentarily knock an electron into a higher orbit of the atom. When the displaced electron falls back to its former level, a quantum of radiation is emitted. The wave length of radiation depends on the energy zone of the disturbed electron and on the type of metal vapor used  in the arc tube.

HID bulbs produce 5 percent of their output when first ignited, requiring a few seconds (usually  15-20) to reach full output. Also, if power to the lamp is lost or turned off, the arc tube must cool before the arc can be re-struck and light  produced. Halcyon HID lights require approximately 5010 seconds before they can be re-lit.

Light-Emitting Diodes （LED） are light sources utilizing diodes that emit light when connected in a circuit. The effect is a form of electroluminescent where LEDs release a large number of photons outward; the LED is housed in a plastic bulb, which concentrates the light source.

The most important part of an LED is the semi-conductor chip located in  the center of the light source. The chip has two regions separated by a junction. The p region is dominated by positive electric charges and the n region is dominated by negative electric charges. The junction acts as a barrier to the flow of electrons between te p and the n regions. When sufficient voltage is applied to the semi-conductor chip, the electrons are able to cross the junction into the p region.

When sufficient voltage is applied to the semi-conductor chip, electrons can move easily across the junction where they are immediately attracted to the positive forces in the p region. When an electron moves sufficiently close to a positive charge in the p region, the two charges “re-combine”.

Each time an electron recombine with a positive charge, electric potential energy is converted into electromagnetic energy. For each recombination of a negative and a positive charge, a quantum of electromagnetic energy id emitted in the form of a photon of light. This photon has a frequency determined by the characteristics of the semiconductor material (usually a combination of the chemical elements gallium, arsenic, and phosphorus). LEDs that emit different colors are made of different semiconductor materials. Said simply, LEDs are tiny ‘bulbs’ fit into an electrical circuit. However, unlike ordinary incandescent bulbs, they don’t have a filament. LEDs are illuminated solely by the movement of electrons in a semiconductor material. making them energy-efficient and extremely resilient over long periods of time.

LEDs don’t have a filament to burn out or break; therefore, they last much longer than conventional bulbs. Given that a very small semiconductor chip runs an LED, they are very durable and tend to last many thousand of hours. Moreover, LEDs are ‘instant on’, much like halogen lamps, and thus convenient for use in applications that are subject to frequent or potential on-off cycling. Conversely, HID lamps are more fragile and have to warm up (15-25 seconds) during ignition. However, HID lights are much brighter than current LED configurations. This is because the side-emitting light found with HIDs is much easier to focus; the front-emitting nature of LEDs does not lend itself to a tightly focused beam. HID lighting is still preferred by most divers given the superior intensity and tight focus. However, LED technology is changing rapidly and it is forseeable that LEDs will eventually surpass the performance of the HID lighting.

BMW first introduced these unique headlights on the E39 5 Series in 2001 with the headlight and tail light redesign for the BMW 5 Series. These were powered by fiber optics pointing through a filament light bulb. For that time, the original concept for what they called Corona Rings are used as daytime running lights was revolutionary, but this original design is very dim, especially by today’s standard when comparing with the new Audi or Mercedes’ daytime running lights.

Soon after this revolutionary new design, fiber optic and cold cathode fluorescent lighting (also known as CCFL) were invented in 2004 for BMW E36 3 Series, before 2001 BMW E39 5 Series and BMW E46 3 Series, which did not come with the rings.

For all the newer model BMW with stock halo rings, the newer and brighter high power LED lights have been adapted to replace the stock filament bulbs or H8 halogen bulbs to make the BMW Angel Eyes in a HID matching Xenon White color and brighter at night time.

If you’re planning to celebrate the Luck O’ the Irish, join us! At AFTERPARTZ.com, we are celebrating ST.Patrick’Day from Mar.7th to March.17th. Everyone can get 10% OFF storewide. Whatever you buy, you can enjoy the discount. Join now!

How to jump start a car ?

Being stranded on the road with a car battery problem is something we all try to avoid. But sometimes it is so unfortunate that we come across this situation. 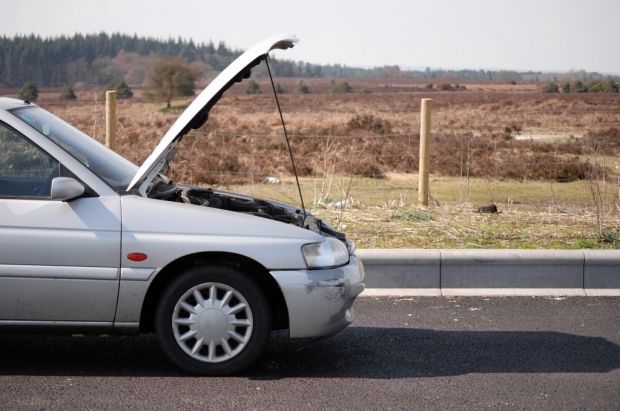 Keeping a jump starter in your car is necessary in case there is something wrong with the battery. But it is better for you to have a regular check of your battery because if it becomes totally dead, even though you try hard with a super jump starter, it cannot help. So, take good care of the battery and get a good jump starter in case of emergency.

Hope you are all doing well. All AFTERPARTZ members have been back to work already and orders have been processed normally from Feb.15th.
We are sorry that you have not received a New Order Confirmation Email from us as system broke down soon after we had the holiday off. We just fixed the problem yesterday so some of you may even be unable to receive the shipment confirmation email. Sorry about it.
You can easily check the shipment information from your AFTERPARTZ account or just contact us for tracking number. We are always here for you.

Chinese New Year is coming soon on Feb.8th. We wish all of you a Happy New Year!

As our main warehouse is located in China, most of the orders from now to Feb 14th will be processed on Feb 15th. Some orders shipping directly from our warehouses in USA can still be processed on 9th and 11th. http://www.afterpartz.com/us/us-shipping.html/
Shipment will be later than usual during this holiday and your understanding is very much appreciated.

Wish you good and hope you enjoy shopping at AFTERPARTZ.COM!

Good morning everybody. AFTERPARTZ is now joing WordPress! We will post our products and related topics here. Welcome to join AFTERPARTZ WordPress and welcome to share your real experience with our products.

The above photos are provided from our customer. Real setup in his car. Good comment from him. please visit http://bit.ly/1nzBHcJ.